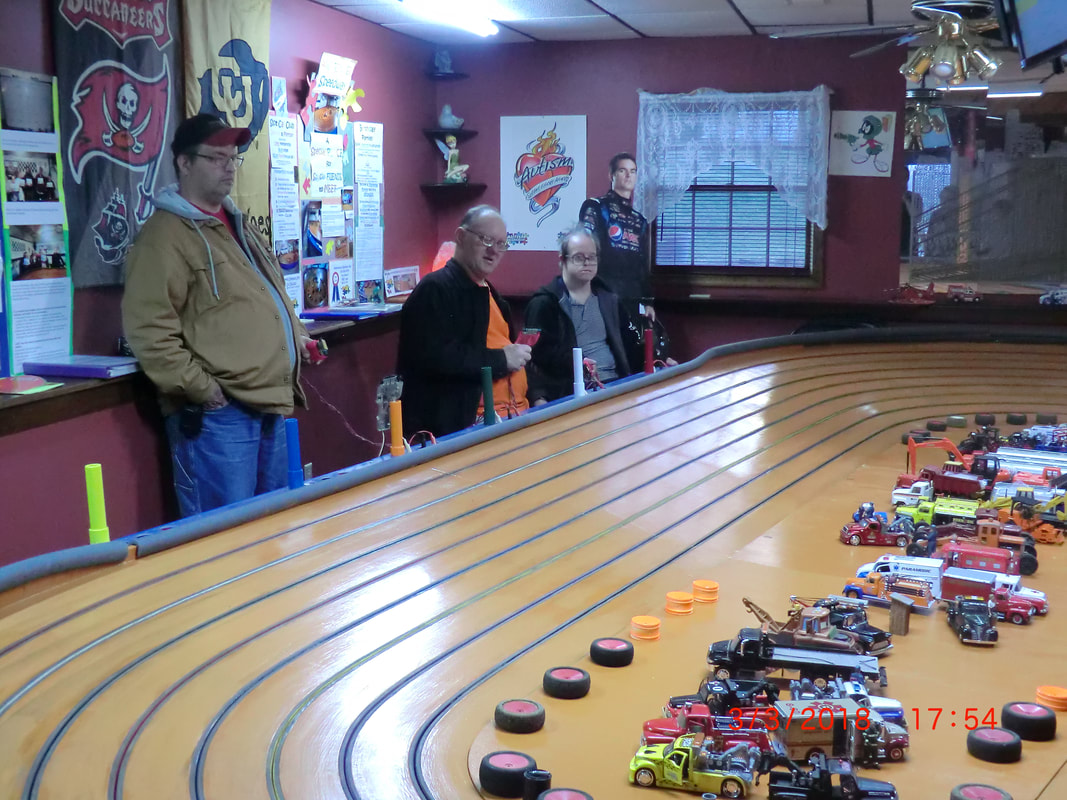 ASSCC History
Jan 2010 - Cheriel met Suzy Brenner to volunteer and learn about Special Needs kids and their parents. It started with the Dance-A-Thon at NHS, the Walk for Autism City Island, and continued with trips to Chocolate World, riding Thomas the Train in Stroudsburg with Alex and watching the excitement and joy in his eyes. When you have these heart-warming experiences, the only thing you can think about is getting as many people involved and help as you can to support the cause in new ways!

Later in 2010 - Rodney created a special Spooky Town display that Alex Brenner and Andrew Elliott became fascinated with, staring at the ghosts, ghouls, and headless horsemen. Andrew couldn't tear his eyes away from it. Rodney discovered something new about Andrew – that he loved watching our animated Spooky Town display. At Suzy's Christmas party that year, Andrew kept asking, "When are you going to have Halloween again?" He wanted to help put up the next display, and we knew right then that we were onto something bigger than we had ever imagined! Andrew helped us win second place in the 2010 Lemax Worldwide Holiday Display Contest.(1800 entries). Since we love to go slot car racing and the closest race track was an hour away, my husband, Rodney, decided to create a slot car track of our own, with the help of builder Chris Dadds in Indiana who hand-made the track in pieces and then drove to our house in PA to deliver it, right before the September flood of 2011.

Early in 2012 - We had an open house where we introduced Awareness Speedway as a Special Needs track to help give back to our community. We wanted to try it out so, Rodney invited Alex and Wes over and Wes helped Alex figure out when to pull the controller and when to let it go. Alex walked right up to the spot, picked up the controller, and ran the slot car around 20 times before stopping. He acted like he'd been doing it all of his life.

Summer of 2012 - Awareness Speedway Slot Car Club was born. That inspired Rodney to tailor this new family fun activity with Special Needs in mind. He created special cars that the kids can race on the track. After each segment they race on a specific color, they receive a certificate of achievement and praise on a "job well done!"..

Summer of 2013 - ASSCC had issues with our programs and ideas being appropriated by other slot car racers and racks, for their benefit. This hurt us tremendously in our fund-raising abilities because we can’t offer cash prizes as the other tracks can.

December 2013 - Awareness Speedway Slot Car Club, Inc., was formed and registered with the state of PA as anon-profit and officially became the only dedicated special need slot car club in the world.

February 2014 - ASSCC had an issue with local township zoning and had to appeal their decision. Without Evan Pappas and his dedicated team at Shumaker Williams, PC; Karen Durkish, our CPA; and a law student who interned with Shumaker Williams and did the case law research for our appeal, we would not have come to an agreement with the township. All appeal work was done pro bono..

May 2014 - ASSCC implemented its educational and safety programs for intellectually disabled and special needs adults and children.

October 5, 2014 - Awareness Speedway Slot Car Club is now officially a 501(c)(3) charity. We are now the only slot car club in the USA that is an official 501(c)(3) charity designated for intellectually disabled and special needs adults and children. This designation makes all donations eligible for a tax deduction on yearly tax returns. We would like to thank everyone who is supporting us on our journey.

August 5, 2015 Awareness Speedway Slot Car Club had to shut down our programs do to the presidents and vice presidents work schedule . We were unable to find volunteers to run program till we are able to run program again. ASSCC is still an active charity that only the programs were temporarily shut down.

January 5, 2016  The decision was made by the board of directors to maintain the current status till a new safer location can be found.

May 9, 2017   The owners of the track were able to find a house to put track back up to be able to restart ASSCC's programs.  Shooting for early 2018 start up.

March 2018  Track and club are back servicing our special friends in its new location of Newport, Pa.